The annual SATURN conference is usually one of the highlights of my professional year, and SATURN 2018 was no exception. This year’s edition took place in Plano, TX, and presented another jam-packed cornucopia of digital architectural knowledge in four parallel tracks over four days. Don’t be sad if you’ve missed it: all sessions have been recorded and will be posted to the SATURN playlist on YouTube. I will certainly check back there to see some of the talks I had to miss – because there was just too much going on in the parallell tracks..

Monday was warming-up day with full-day training sessions and a workshop on “growing great designers”. I attended the workhop, in which we discussed how to select and train designers and architects – but also how to get organizations to care about good design. It was interesting to brainstorm the essential “canon of knowledge” about software design, which made us realize that the paradigm of architecture as a set of design decisions is still not as accessible as we would like: there are great books and established training curricula about many other design paradigms, such as patterns, modeling and many architectural styles – but if someone asks “How do I put the idea of architecture as a risk-driven decision making discipline in practice?”, there’s no easy answer yet (although George Fairbanks’ “Just Enough Software Architecture” comes close, as does the RCDA training program). The workshop outcome can be found on github.

The conference proper took off with a keynote on evolutionary architecture by Rebecca Parsons of ThoughtWorks. She introduced the idea of an “Architectural fitness function” to describe how close an architecture is to its desired characteristics. Measuring the function over time would enable us to monitor architectural quality during an architecture’s evolution. Extending quality attribute scenarios with temporal behaviour?

In the afternoon, we played the Smart Decisions Game – a fun way to introduce people to the idea of making architectural trade-offs based on quality attribute requirements. The task was to select machine learning algorithms for a specific context, and we each received a deck of cards. Each card summarized an architectural choice (an algorithm), including its impact on quality attributes. The game was extremely well prepared by the guys from SoftServe and Rick Kazman. and I was especially impressed by the ease with which we could plug these algorithms into their toolbox.

We closed the day with a nice reception, playing quaint folklore games like Cornhole and the bizarre Armadillo races…

Wednesday’s keynote by Ricardo Valerdi was a fascinating journey into the world of Virtual Reality. Ricardo told the story of the development of an app for creating concussion awareness among football players. It was a nice bridge between architecture and user experience, which becomes ever more important as an architectual concern.

I was especially happy to see Thijmen de Gooijer expanding on the metaphor of marriage for committing to architectural decisions which I had introduced a year earlier in my talk on architecture life cycles. Thijmen had some great examples. Trying out compatibility with a potential mate by making a trip to IKEA is a bit like setting up a continuous delivery pipeline – the only way to the exit passes by everything you could possibly run into, and if you have seen your mate’s reaction to all that is on display you get a pretty good idea of what life with that person will be like…

Thijmen de Gooijer expanding on the metaphor of marriage for tough #architecturaldecisions – including a trip to #IKEA #SATURN18 pic.twitter.com/uCv3NRX6if

In the afternoon, I talked about Shortening the architectural feedback loop – an extended version of my blog post with the same name. We had nice discussions, and this talk was voted runner-up for the best presentation award. [edit: watch the talk on the SEI YouTube channel].

Key ways to shorten the architectural feedback loop from @eltjopoort at #SATURN18 pic.twitter.com/ekf8rftV7H

Death of the architect

After my talk, there was an amusing panel discussion about what’s happening to the role of software architect and how teams should make important crosscutting design decisions, called “Death of the architect”. The general consensus seemed to be that it is a good thing that architecture is becoming more of a shared concern than the domain of a single person – however, the pendulum seems to have swung too far in the direction of decentral decision making, to the point where people don’t care about design anymore, or even refer to architecture as “the dark side”. This excessive denial of the importance of cross-cutting coherence has led to a worrying build-up of technical debt across many organizations, with some disastrous consequences. This prompted the remark that “If the architect is dead, the world is doomed: it will drown in a pool of techncial debt.”

The other highlight of the afternoon was a nice talk by Sebastian von Conrad, about applying the concepts of Douglas Hubbard’s “How to measure anything” to quality attribute quantification.

The final day started with an amusing game of slide roulette (a lot of fun, but why schedule it at 9AM???), after which Linda Northrop Award winner Eoin Woods gave a very nice acceptance keynote, describing the Five Ages of software architecture, and his outlook for the coming age of “Dissolving systems”.

After two interesting GDPR-related talks by David Max and Andrzej Knafel, it was time for the Ethical Software Architect workshop that I had prepared with Michael Keeling. [edit: watch the session on the SEI YouTube channel]. We looked at some examples of ethical impact of architectural decisions in news headlines, and at some reasoning frameworks architects can use when they are confronted with ethical dilemmas. We then split up in groups to discuss fictitious scenarios that any architect could sooner or later encounter. These discussions became so lively that we got some complaints from jealous speakers in neighboring rooms afterwards! The attendants were so happy with this session that they voted it number 1 for this year’s best presentation award – which says a lot about how architects feel about ethical aspects of their work. There seems to be a real need for more ethical guidance for architects in the digital world, and I would be surprised if it wouldn’t become a regular topic in architecture conferences the coming years.

Very lively discussions at our #ethics for #architects working session with @michaelkeeling at #SATURN18 pic.twitter.com/ssAJNKUqcq 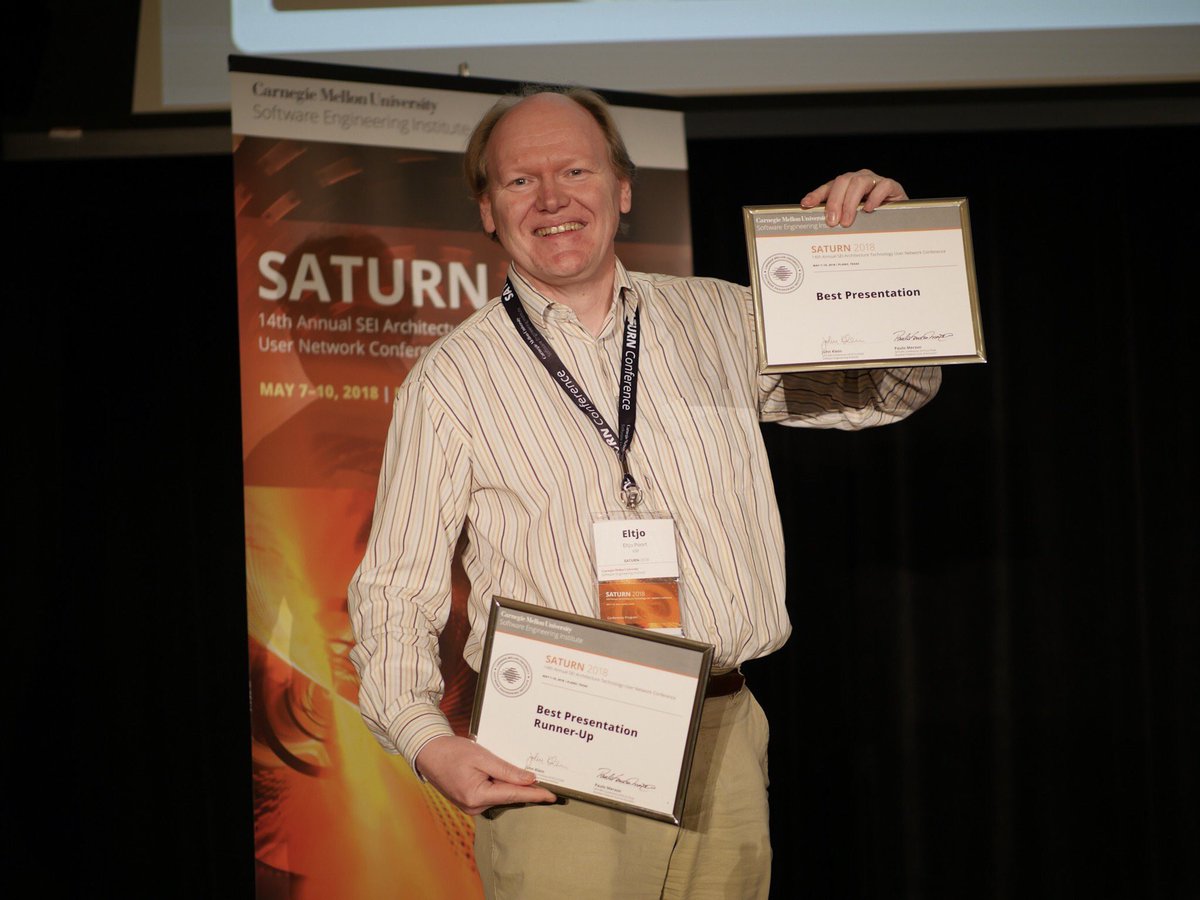 All in all, the conference left me feeling very fulfilled and inspired (and not just because of the nice recognition I received from the attendants’ rating of my sessions).

This site uses Akismet to reduce spam. Learn how your comment data is processed.

The postings on this site are my opinions and do not necessarily represent CGI’s strategies, views or opinions.